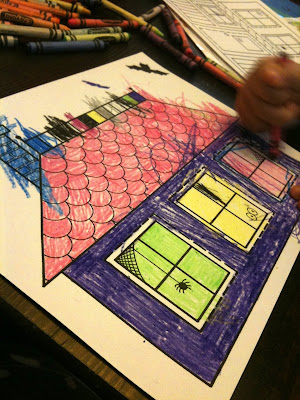 A Haunted Halloween Project. Buga and I made this Haunted House project (Thanks, Mom!) as one of our Art projects. There were two sections to color – the top of the house and the bottom. Buga REALLY wanted us to color the house, together – which I try not to do because I like her art to be her own (I love when it’s all hers) but she insisted on working together. I wasn’t going to turn down an act in cooperation (or coloring, for that matter!), so we worked together. I tried to let her make as many of the coloring decisions as possible so it was still hers…I was just the helper. We did this project while Boo was sleeping so it really was a peaceful coloring kind of project.
When we were done coloring I cut each window/door around three of the sides so they would lift “open” and then we glued it on a bigger sheet of white paper. 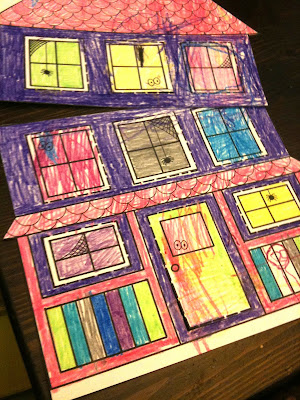 She drew whatever she wanted inside the windows (This part she did all by herself…I LOVE her little drawings). While she drew I was talking to her about what was going on in her picture. She narrated what she was drawing and I would write it down on a sheet of paper so I remembered all her stories. As she was telling me about the characters and what they were doing I turned each sentence into a rhyme and created a little Halloween poem out of it. Every line in the poem is based on what she told me – modifying a word here or there so it would fit in rhyme and rhythm. She wrote all the lines, in concept, except the last one which I did as a way to wrap it all up and give it an ending. I am kinda proud of our collaboration <3 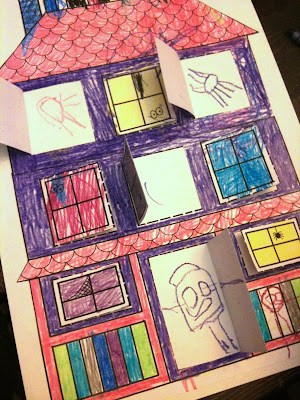