One of my best Mom-friends and I often walk to the grocery store together with the kids as a way to get out and move around a little. It’s a great walk, gets the kids out, and gives us time to talk. The other day we went on one of our grocery runs and, not knowing what to make for dinner, she said she was going to get a hot pre-made chicken. These things make so many recipes a cinch, so when she told me what she was having for dinner I decided to get one to. Asking what kind of dinner I would create with it, I told her: Chicken Pot Pie. She was excited and decided to give it a go too. I don’t have step by step pictures, but it really is a simple recipe that doesn’t take much time to put together – but really is a yummy, nutritious dinner on a cold winter’s night.
———————————————————————————

I made two individual pies for dinner that night and made a regular 9″ pie to freeze for a later time. When I was pregnant I learned a lot about casserole cooking – now it’s a trick I love using. Double your dinner recipes when you cook so that you only make dinner HALF the time.
———————————————————————————
I used ramekins for my individual pies: – one pie crust, fold over for each. Though you could very easily just have a top crust (thus getting 4 individual pies from one box of pie crust) – I’ve had Pot Pie at restaurants served this way.

1. Pull the chicken apart, using the meat you would like. Put this is a large skillet.
2. Add Cream of Chicken and turn heat on Medium
3. Prepare the frozen veggies so that they begin cooking (about half the suggested cooking time)
4. Add the frozen veggies to the skillet. Stir to incorporate all throughout.
5. Add dried cranberries and incorporate. 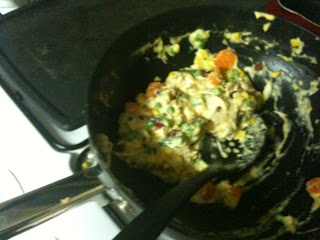 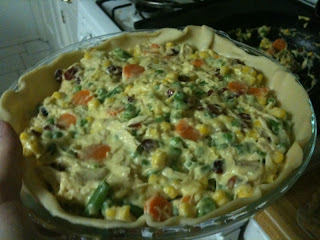 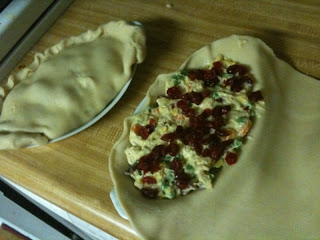 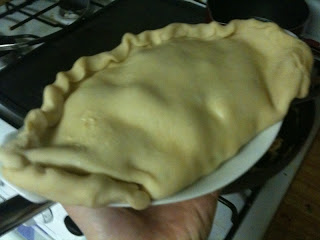