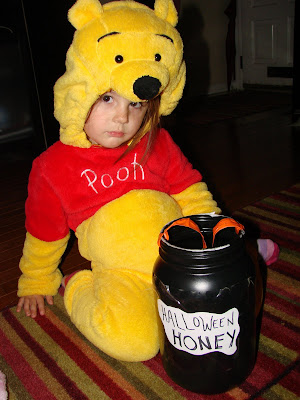 Buga decided, after much thought, that she wanted to be Winnie the Pooh for Halloween. I tried to talk her into Princess Belle (we already own a beautiful costume), a Doctor, a Cow Girl, or Fancy Nancy (and I think I almost had her sold on this one!) But 3 days before the big Trick Or Treat she said she wanted to be Winnie the Pooh, and was stuck. I wanted it to be something more accessorized or fun, but she really wanted Winnie the Pooh. Of course, the Disney Store, this year, decided not to carry a Winnie the Pooh costume, and, left without time to make one, resorted to the typical party and costume store for help. We made a trek out one evening to a store where there was one Pooh costume left, but looked like it had already been worn and returned. It was so cheap looking and the inside so ITCHY. I knew if she wore it even for 1 evening she would break out in a rash…I Ebay-d, but it didn’t work out. Amazon to therescue. A “Deluxe” costume looked so much cuter, softer, and warmer and because I am an Amazon Prime member I was able to get next-day shipping for about $6.00. Though it was not MY choice for a Halloween Costume, I have to admit, she really did look cute — and best of all, she LOVED being Pooh Bear. My husband made a “Halloween Honey Pot” for her loot, and she was excited to collect her goodies. We went house to house and she commented : “There are so many doors…” Ha Ha. But we had fun, and her costume’s best feature : thewarmth. It was cold and her costume was like a pair of cozy pajamas. 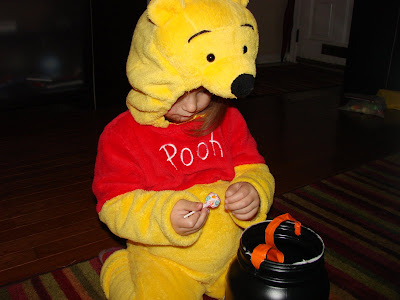 Checking out her Halloween Honey 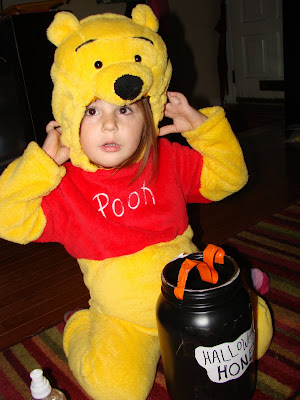 Get latest news and updates